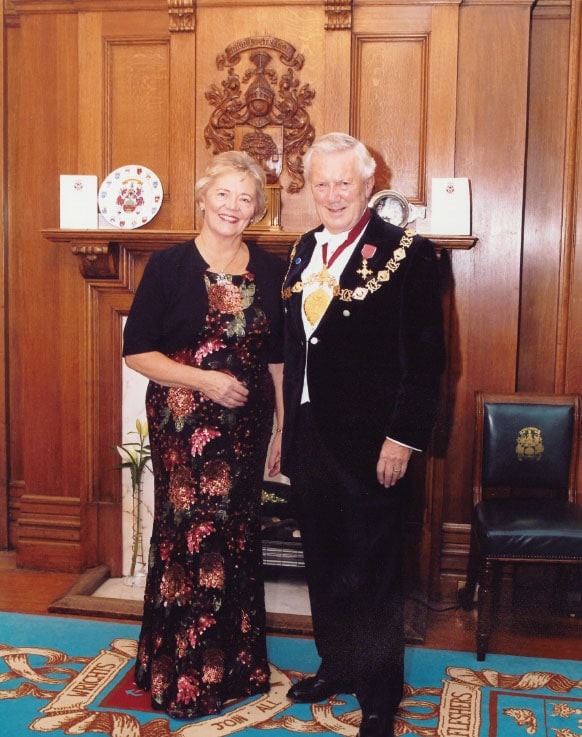 Keith Brown counts himself fortunate to have experienced a life which has been stimulating, interesting and hugely varied, but above all one which has been full of family love and laughter and generated enduring friendships.

It is a life which has embraced a successful and rewarding business career, an extensive involvement in politics and local government, including standing for Parliament and becoming Chairman of the local council in Brentwood. He has served on sporting bodies in cricket and horseracing. As a Liveryman in the City of London he served as Master of the Coopers’ Company and later Deacon of the Glasgow Coopers and finally Deacon Convener of the Trades of Glasgow and Glasgow’s Third Citizen. As a Freemason of 50 years, he has experienced the privileges of the office of Worshipful Master.

These chapters in Keith’s life, and that with Rita for 50 years, are not just a record for future generations but equally as a contribution to social history of an era which started during WWII and continued through to the pandemic of 2020 and 2021. It covers a period  which has witnessed huge and rapid changes in everyday life.

It is not just a chronological list of events but laced with historical cameos and where Keith has strong views they are fully expressed.  The final chapter looks to the future.

REFLECTIONS looks back on a life which has brought so many opportunities and experiences and with the ultimate accolade of an OBE from Prince William at Buckingham Palace in 2015.

From East Ham to Woodford

Keith’s parents were born in East Ham but like many others of that generation, when they married, moved to Essex.  Their first home was in Woodford where Keith and his sister Eunice spent their early days. He recollects on the post war era of shortages and rationing and a loving family brought up on Christian principles. Keith’s father was a strong guiding influence during his life, particularly steering him to a career in the City of London. Keith’s mother was a ballerina and keep fit teacher. Keith believes he has inherited much of her energy which has supported him during a full and active life.

From School to Supermarket

After junior school in Gidea Park Keith went to Forest School on an Essex Council Scholarship but his was an unremarkable record.  He is critical of some of the discipline that was meted out by cane and other physical punishments. At the age of 17 he was attracted by a lecture on the future of the grocery industry and left school to join one of the first supermarkets in the country as a management trainee. He did not mind the long hours and hard work but the lack of training caused him to leave and at the age of 19, with his Father’s encouragement, started as an office boy in a city stockbroker.

From Gidea Park to Fryerning

The family moved to Gidea Park in 1951 and the next 20 years were the most formative in his life.  He became heavily involved in the local Church, St. Michaels, where the vicar, Rev. Frank Leech, was one of the great influencers and mentors in Keith’s life.  It was there that he made lasting friendships which have continued to the present day.

Keith met his future wife Rita through the Young Conservatives and they married in 1972 and moved to start a new life together in Ingatestone.

Keith describes their 50 years  in Ingatestone  and later Fryerning as a ‘Golden Era of Marriage’. They became active in village life particularly through the local Conservative branch where Keith represented Ingatestone and Fryerning as a member on Brentwood Council and became Chairman in 1983/4  which he combined with bringing up a young family and a rising career in the City of London.

Rita and Keith have always welcomed visitors to their home and have been the venue for many gatherings of family and friends.  Their house in Fryerning which they have lived in for 35 years, has been the venue for Charity balls, garden fetes and many fund raising events as well as family weddings and special parties. In retirement it has been a focal point for the vast array of charitable and community activities  which still continue to this day.  Keith was awarded his OBE in 2015 for services to charitable fund raising and the community in Essex.

From the Council Chamber to Downing Street via the White House

Keith’s political involvement started in Romford where, as Chairman of the Young Conservatives, he was active in many parts of the Association. He was elected to the London Borough of Havering at the age of 26 and assumed a number of duties particularly as Chairman of the governing body of various schools.

He was elected to the Committee of the London Young Conservatives and then to the National  Young Conservatives where he was Deputy Chairman  for two years.  This  involved him with the top committees of the Party and meetings with senior ministers including dinner at events at 10 Downing Street.  He travelled extensively in the United Kingdom and internationally. He led a delegation to the US elections in 1972. These were the years where Keith developed his political principles.

He fought two general elections in 1974 in Grimsby.  In 1976 he was elected to Brentwood District Council and became Chairman (Mayor) in 1983/4. With Rita they ran a hugely successful Charity evening as well as a Civic Dinner. Rita was active in the local branch and the Constituency Ladies Committee, while Keith served as President of the Association.

From Finch Lane to Wall Street via Airbus and the Underground

In 1962 Keith joined W. Greenwell & Co. one of the leading London stockbrokers. He studied and achieved qualification in investment and joined the nascent research department to become a junior analyst. Keith mixed politics with business but in 1975 an opportunity came for advancement which led to membership of the Stock Exchange and a Partnership. He became a top rated investment analyst of the banking industry. He was widely regarded as a leading commentator in the media on the financial services industry. He later additionally assumed the role of Managing Director.

Big Bang of 1986 led to a huge shake up in the business and Greenwell was one of the early victims of the demise of many trading names.

Keith was head hunted by Morgan Stanley as a Managing Director specialising in international financial share analysis and Head of European Research. He later took on a senior role in Investment Banking before retiring in 1999.

While at Greenwell Keith was appointed to the Board of London Regional Transport with a specific responsibility for those with disabilities and then served as Chairman of the Audit Committee.

While at Morgan Stanley he was appointed by the Government to be their Director at British Aerospace and served for 12 years in this role and as Chairman of the Audit Committee.

From Ascot to Lords

Keith and Rita have had a long involvement with horses and have bred and raced many over some 30 years.  This section of the book has experiences of many exciting occasions. Keith was Chairman of the Racecourse Association in 2002-4 and relates  some of the challenging  governance issues which still continue to this day.

Keith has had a long love of cricket and has been a member of Essex County Cricket Club since a boy.  After retirement from Morgan Stanley, Keith took on the role of Treasurer and Chairman of the Ground Development Committee as well as creating the Essex Cricket Foundation serving as its first Chairman.

From St. Michael’s to Jerusalem via King Solomon’s Temple

Keith and Rita have strong Christian beliefs.  Keith’s were moulded at St. Michael’s Church in Gidea Park where he was altar servant and one of the leaders in the youth group AYPA.  Rita’s were moulded at the Methodist Church in Muswell Hill.  Both have  led to long lasting friendships. Keith expresses concerns about the future of the Church of England in an increasingly secular world.

There have been defining moments in their Christian journey but a visit to the Holy Land was the most poignant and  the story is recited in the book. Visiting Oberammergau had a similar influence.

Freemasonry has been a part of Keith’s life for over 50 years.  He was initiated by his father in 1969 at Wykeham Lodge in Romford.  Sadly, his father died a year later and they were unable to enjoy the fellowship that freemasonry provided.  Keith did not let his father down and progressed to become Master in 1978.  He later joined Easterford Lodge in Kelvedon and became Master there.  He was later awarded Grand Office which is very special in Masonry.

While some parts of the Church are hostile to freemasonry, Keith sees no conflict between his Christian beliefs and activities in freemasonry.  Both embrace fellowship and charity and are built on strong foundations.

Keith became a liveryman of the Worshipful Company of Coopers in 1976 and was elected to the Court in 1996.  For the next 25 years it became a major focus of his life, supported by Rita. Keith became Master of the Coopers Company in 2002 and then was persuaded to join the Mastercourt of the Coopers in Glasgow and became their Deacon (Master) in 2008. He was later persuaded to take on a lead role in Glasgow and in 2016 was elected Deacon Convener of the Trades of Glasgow and the City’s Third Citizen.

Keith records his journey through three institutions and the initiatives he took but in particular a detailed commentary  leading up to the  role of Deacon Convener and then an insight into  all the duties that office demanded.  This section of the book is probably the most in-depth record of a Deacon Convener’s year.

In the final chapter Keith reflects on the changes that have taken place over his life and the challenges for future generations.

There has been a huge change in the world order and with the rise of China, the breakdown of the Soviet Union and the rise of militant Islam, the decline in the world role of the United States and the UK’s future after the European Union.

Communications and technology have developed in a way that could never have been envisaged in his youth, which has brought both huge advantages to lives but also a vehicle for  power without responsibility, which Governments need to address.

Economic management has gone through a revolution and the comparison of interest rates in the 70’s has no relation with today, but there are warnings.

Social awareness, climate change, multi-culturalism and free speech and  wokeism are issues which did not have focus in the last century but have now come to the fore.

Keith sees so much talent in young people, whether it be business, technology, finance, academia or public service as well as sporting and cultural. All of these will take the  country forward and hopefully bring  similar experiences that Rita and Keith have been privileged to enjoy. 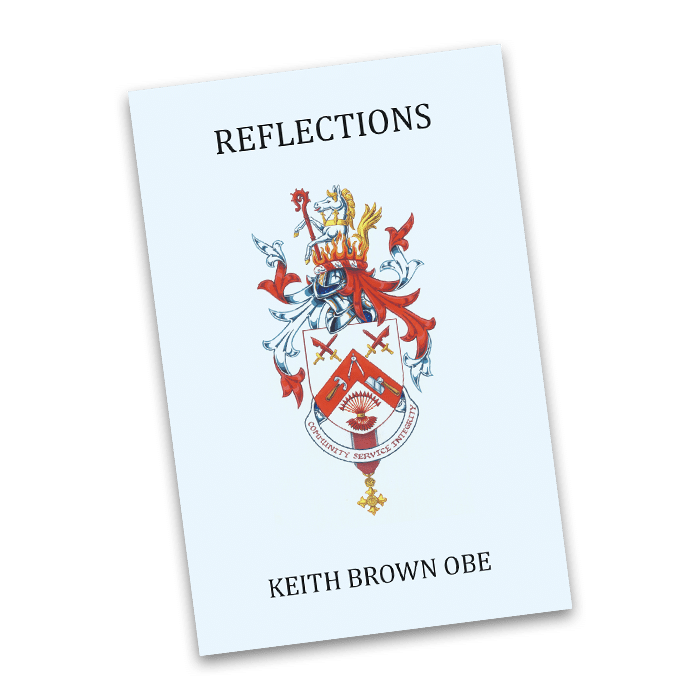 The proceeds of the sale of this book will be donated to the family charity Fryerning Foundation (charity no.1081092).

Please fill in the order form below:

If you wish to BACS Transfer please send money to Fryerning Foundation Sort Code 18-00-02 Account No: 05467187 with your name as reference.